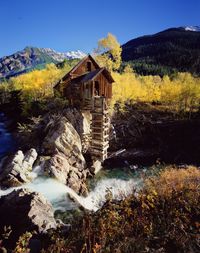 This is a jeep tour to the town of Crystal and also to the Crystal Mill. The ride will be rough but not difficult to walk around once you get to the location. You will need to dress warmly, bring layers. Bring water, sunscreen, and lunch or a snack. There are no toilets along the way. So if you are uncomfortable copping a squat in the woods, you may not want to do this tour. There are outhouses at the town of Crystal and at the mill if you can stand to use those. The tour group will provide TP. Cost is $800 per jeep. Each jeep can hold five people. So that comes out to $160 per person to be paid at the time of check-in. No money is needed right now. The tour can handle up to 20 people. We will be doing the five hour tour. This will be a first to contact me, first served. Anybody beyond 20 people will be put on a waitlist. So please confirm with me through messenger with the names of people if you will definitely be going so I can start a list and can keep track of who is coming. So as not to cost more than $160 per person, I need at least five people or 10 people or 15 people or 20 people. Anything less than a number divisible by five means it will cost more money for people to go. If that does not make sense please contact me and I’ll try to explain it better. We will need to leave Aspen at 8am and meet at Crystal River Jeep Tours headquarters. We can car pool as much as possible. Contact is at Aspen in October Facebook Page via their messenger. 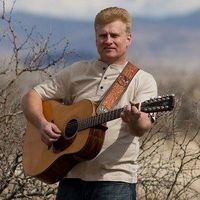 Yes, it's that time of year when we make our plans to get together in Aspen to celebrate the life and music of JOHN DENVER -- and this is also YEAR 25 since he left us. How time flies!

I want to invite you to join me and my fellow musicians (and an extra special guest!) to spend the evening Thursday, Oct 6th doing just that - sharing John's wonderful music together! What a legacy and vast catalog of unique and fantastic songs he left us! We'll be playing a 2-1/2 hour set sharing some of our -- and YOUR -- favorite songs. Get ready for some great music!

Time, date and location: Thursday Oct. 6th, 6:30-9:00 pm MDT The 'Mountain View Room', Mountain Chalet 5th floor I hope you'll set aside an extra $25 so you can attend my show! I'd love to help make your visit in Aspen - this special year in particular - a most pleasant and memorable experience, as we enjoy together some of the best acoustic music ever written -- the music of John Denver! General admission $25 donation. No advance sales, please pay at the door (cash USD please!) THANK YOU so much! 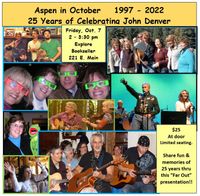 Aspen in October - 25 Years of Celebrating John! We have been celebrating John Denver in Aspen each October for 25 years!!!! There are lots of precious memories and stories to be shared, as well as wonderful photos thru all the years we have gathered together to celebrate John Denver. Come experience this celebration through a powerful presentation that captures the years, the tears, the laughs, the friendships, and the music that has become special to folks from all over the world. The presentation is a prelude to the commemorative book “Aspen in October: 25 Years of Celebrating John Denver”, edited by J.P. McDaniel and to be printed in late 2022. This event will take place on the 5th floor of the Mountain Chalet from 2 – 3:30 on Friday, Oct. 7. Then stick around for a special presentation about the life cycle of eagles by Don Larson, who will share his very interesting experiences and beautiful photos of eagles he has observed. (4 - 5 pm). 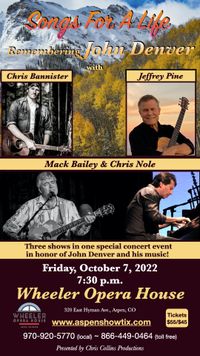 John Denver earned international acclaim as a singer, songwriter, He was also one of the best known and loved performers our time. His music still resonates today and remains timeless.

In honor of John Denver and his music, this event will feature three shows in one very special concert event!

Chris Bannister opens the evening. He hales from the North of England. A professional musician since the age of twenty, his distinctive vocal style has always led to him being compared to the great John Denver, and twelve years ago Chris started performing his show “The Music of John Denver.” After being contacted by John’s former lead guitarist Steve Weisberg in 2012, Chris has performed in the USA at the annual Aspen In October festival and is looking forward to returning this year. www.chrisbannister.com

Jeffrey Pine is the evening’s second show. He is a world class guitarist, vocalist and songwriter with a celebrated career of over three decades of live performance, song craftsmanship, recording and entertainment. Residing in California, Jeffrey’s repertoire of music includes his own compositions, as well as well-known classics that include paying tribute to John Denver’s music. www.jeffreypinemusic.com

Mack Bailey and Chris Nole close out the evening as a duo. With his strong, expressive, classically trained tenor voice, Mack Bailey, is a nationally acclaimed singer/songwriter who has performed all over the world as a member of the renowned folk group, The Limeliters. As a member of The Hard Travelers and “Tribute to John Denver” productions, Mack has sung with dozens of folk and country stars, as well as performing with his wife Rachel Levy as duo. With a masters degree in music therapy, Mack currently resides in Aspen, Colorado where he has a private practice working with the Aspen School District and with his 501(c)(3), Music Therapy of the Rockies. www.mackbailey.com

Accomplished pianist, songwriter, and performer, Chris Nole, has worked with some of the biggest names in music. Nole recorded and toured internationally with folk/pop superstar John Denver in the 1990s until October 1997. Residing in Tennessee, Chris keeps busy as a music producer and session musician.  www.chrisnole.com 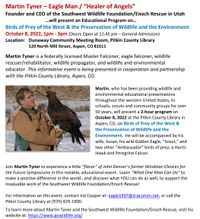 Martin Tyner- Eagle Man/"Healer of Angels": Birds of Prey of the West and the Preservation of Wildlife and the Environment

Martin Tyner is a federally licensed Master Falconer, eagle falconer, wildlife rescuer/rehabilitator, wildlife propagator, and wildlife and environmental educator. This informative event is being presented in cooperation and partnership with the Pitkin County Library, Aspen, CO.

Martin, who has been providing wildlife and environmental educational presentations throughout the western United States to schools, scouts and community groups for over 50 years, will present a 2-hour program on October 8, 2022 at the Pitkin County Library in Aspen, CO on Birds of Prey of the West and the Preservation of Wildlife and the Environment. He will be accompanied by his wife Susan, his wild Golden Eagle, "Scout," and two other "Ambassador" birds of prey; a Harris Hawk and Peregrine Falcon.

Join Martin Tyner to experience a little "flavor" of John Denver's former Windstar Choices for the Future Symposiums in this notable, educational event. Learn "What One Man Can Do" to make a positive difference in the world.. and discover what YOU can do as well, to support the invaluable work of the Southwest Wildlife Foundation/Enoch Rescue"

To learn more about Martin Tyner and the Southwest Wildlife Foundation/Enoch Rescue, visit his website at: www.gowildlife.org 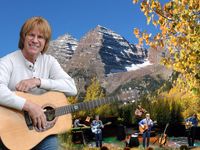 The year 2022 will mark 25 years ago that we tragically lost one of the greatest singer-songwriters and humanatarians of all time, John Denver. Although he left us much too soon, his words and musical legacy continues to live on.

Chris Collins and Boulder Canyon have toured across the country and internationally delighting audiences with their talent, warmth, humor and passion for the music of John Denver. With the show’s captivating performance and stunning visuals of nature, they return to the Wheeler Opera House stage to perform many of John Denver’s famous hits such as "Rocky Mountain High", "Take Me Home, Country Roads", "Annie’s Song", "Sunshine" and other favorites. Join Chris Collins and Boulder Canyon, along with some special guests, for an unforgettable concert in celebration of the life and music of John Denver.

One of our special guests: Jim Connor, writer of "Grandma's Feather Bed" and friend of John's will be joining us to perform this classic! 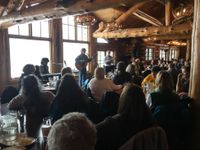 Come join us at The Pine Creek Cookhouse for a delicious luncheon and John Denver's music by Chris Collins and special guests. With beautiful views of the Elk Mountain Range, soak in the scenery while enjoying a good time together! We have enjoyed many special moments and guests these past years, and look forward to being back! As this year will, most likely, be the last year for us to be able to have the event, please come out and join us for a special time together to celebrate John Denver and his music.

Prices have increased over the years, with this year being no exception. The cost for the meal and buffet type luncheon will be $98.00 per person. Reservations are required and on a first come, first serve basis. So, please reserve early! Event is general admission with restaurant style seating at tables.

Please e-mail Suzanne at mountainsrose312@gmail.com to make reservations, for more information on the event and to purchase tickets.

We hope you can come out and join us!

A get together for everyone to say farewell until next year.